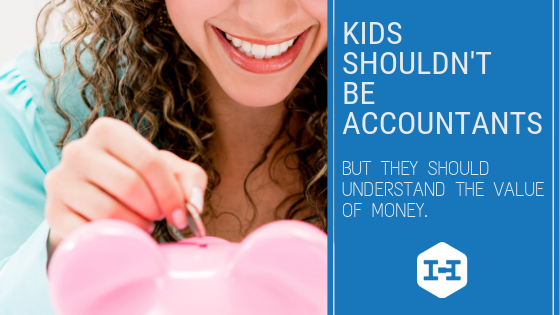 As you might know, Allison and I have two fantastic sons. Chris is taller than his mom, has a voice deeper than mine, and has just started high school. Duff is not quite as tall, has just started grade 4 and the French Horn, and for the first time in his life is in a school where his big brother is not there ahead of him. So far, so good.

For a while, we’ve been aware that we haven’t been teaching them good money habits. What money is, where it comes from, why it’s easy to spend, and what happens if you spend it all. Somehow, there were always more important things to do – or at least it seemed so, once we’d left the office and were home together. (You know, shoemaker’s children are always barefoot, that sort of thing.)

We try to set a good example with our own personal financial habits – as much as you can explain them to a grade schooler – but were never really sure whether or not that had any effect.

Actually, we were pretty sure it wasn’t sinking in. For example, on the way back from school, we’d always hear the question “Can we go to Tims?” (Not hungry – they had perfectly good meals and snacks.) If we’d answer “No”, we’d hear about it all the way home.

It was the same for things they’d like to buy – especially in this world of in-app purchases. And that’s before you count the “real” world. Anybody else with kids of this age, you know what we mean. There was no understanding of what it actually cost to earn that money, so easily spent.

Frankly, it was wearing on us. Allison is in charge of so many things in our lives, so this one we agreed I’d handle. Chris’ transition to high school – complete with bus pass and greater responsibility – seemed the perfect opportunity.

As it happens, this is also on the agenda for our professional body, CPA Canada. The powers-that-be have done much research and are very concerned about the levels of financial literacy of your average Canadian citizen. With good reason, frankly, if you’ve seen the latest data on consumer debt levels.

So…. CPA Canada has taken many steps – often supported by volunteers – to try to address this, as far as possible. As well as coaching and mentoring, this also includes a couple of handy publications. They’re quite well written.

We read this and were guided by it. We realized that the best thing we could do was to set the parameters, agree on the ground rules with the kids, ENFORCE THEM, and off you go.

We agreed on the ground rules as a family. Chris put together a proposal for what would be included in his weekly allowance. We negotiated and settled on the final amount. Duff receives less both due to his age and the fact it doesn’t include lunch money. Here’s a copy of the rules that are now posted on the fridge in our kitchen. You’re welcome to use this and tweak them for your own family!

We haven’t given the kids bank accounts (well, apart from the savings account that Allison puts money into each month that they will get access to when they leave home). Instead, we found a great app, Bankaroo (https://www.bankaroo.com/) The free version’s pretty good, but again you can pay a very modest fee for more function including additional “accounts” and transfers. This has been great.

Basically, it gives them a virtual account at “Bank of Parent”. If the kids earn money, it’s easy to add it to their virtual account. You can set up rules to automate their allowance, or make it so that they have to transfer a certain amount to their virtual savings or charity account each month. They can transfer it back out of savings – but that’s a conscious act. Earned or spent money is recorded, and you can create a downloadable report. When the boys want cash to use it’s deducted from Bankaroo and they have to be responsible for the cash.

A miracle has happened

The results have been amazing. For a starter, when the boys ask “Can we go to Tims?” the answer is now “Sure. Are you buying?” [Note: this doesn’t apply to family outings – just the tired-and-hungry-on-the-way-home.]. So far, they’ve decided not to spend their money.

Next summer, Chris wants to go to England to take a course for a couple of weeks. He wants to have spending money. So he’s set a savings target. Duff also has some plans.
At this point, we’re a month in. It’s been very interesting. Without naming names:

We’re also delighted with the discussions it’s prompted. Chris wanted to change his hair colour last week. We pointed out that it would cost significantly more than his standard haircut. Obviously, we’d pay for the basic haircut, and would cover some of the cost of the bleach job. He’d have to pay the rest of it. We haggled, he agreed, we took the money out of his Bankaroo app, and today he looks like Draco Malfoy.

Act now before it’s too late!

It’s never too late to move on this. Nor too early – the Guide referenced above tells you how you can start with kids as young as 5. We encourage you to try it.
Please add a comment and tell us how it works for you!