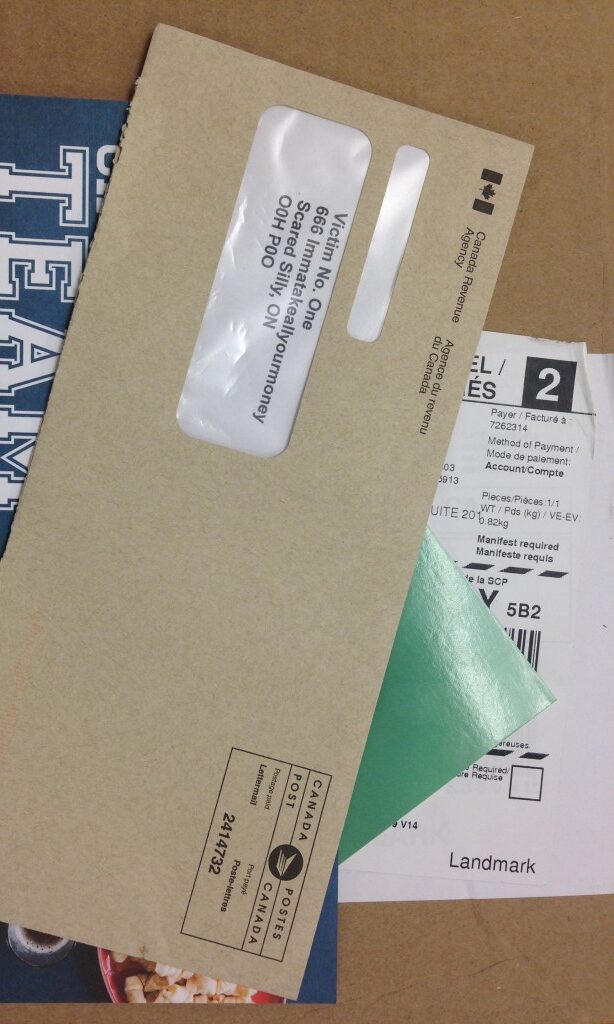 Many people have an irrational fear of brown envelopes that arrive in the mail. I used to be such a person. But we see enough letters from Canada Revenue Agency (CRA) that I had to get over it.

If you suffer from letterphobia, then I offer the following to reduce your stress. Although we try to avoid acronyms, this one is appropriate: “C-R-A”.

Calm Down.
We know why we worry. Taxes are complicated and you’re worried you’ve done something wrong. That envelope may contain a huge and unexpected bill, or advise you that Canada Revenue Agency is taking your first-born in lieu of payment. Frankly, that’s unlikely.

Many letters from the CRA are simply notifications that are nothing to worry about. Examples:

Also, a lot of other things come in those letters: refund cheques, notification of Employment Insurance status, etc.

So: don’t panic. Unless the envelope has red ink on it (see Act Accordingly below).

Read it (obviously).
We wish they would choose a different font and format their letters differently. For some reason, they are just…. hard to read.

Once they’ve done that, we wish they would write more clearly. Frequently, I have to read a letter three times to understand it.

There is nothing in the Income Tax Act that says the letter has to be written in jargon. Occasionally you may feel you got the French-language version. Please – feel free to send it to us if you’re uncertain what it means. Much better than ignoring it.

Act accordingly.
As noted above, many of the letters you get don’t need any action. But…some of them do.

This doesn’t mean bad news or a lot of effort. Often, it’s a request for back-up. For example, if you’ve moved to take a new job or start a business, and have deducted your moving expenses, I guarantee that you will be asked to send in the paperwork behind the numbers.

The reason for this is to make sure it’s a valid deduction. If you were honest with the numbers – and have the paperwork to prove it – then no worries. CRA is just protecting the taxpayer (well, all of the other taxpayers) against invalid deductions.

Whatever you do… don’t ignore it. Two reasons:
– If they request supporting paperwork, you normally have 30 days to send it in. If you don’t send it in, they’ll deny the credit or deduction. And it’s up to them if they accept a late reply or not.

– If they are asking you to file something new…and you ignore it…. then CRA will make up their own number. And it will be a big one. The purpose being to get your attention. Then you have to persuade them to change their mind. This is harder, and often expensive.

You don’t need me to tell you this… but ignoring the letters WON’T make them go away. Same applies to changing address and “forgetting” to tell CRA.

An envelope with red ink on it typically means you have ignored all previous communications or not replied to their satisfaction. This is your last chance. Whatever you do, don’t ignore this one.

See. Nothing to worry about.