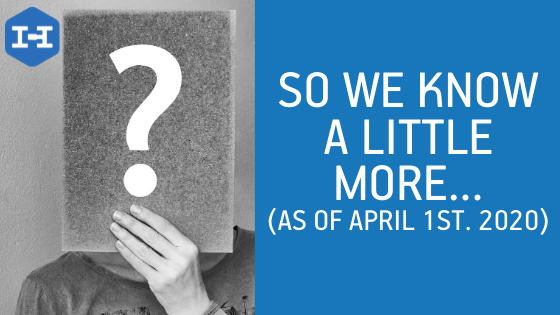 So We Know a Little More…

So We Know a Little More…

So…. it’s April 1, and we had some more announcements. We assume that these are not intended to be April Fool jokes.

A large caveat: The PM and his other ministers have been quite candid about the following:

Broadly, we agree with this approach and feel that the Government is doing the best that can be done. Some of the details and unanswered questions will affect many of our friends and clients. We’ve tried to call these out as best we can, below. We also note that the PM and ministers have to be a bit cautious in what they say, before it gets put before Parliament…

You may recall that this is the “catch-all” benefit available for anybody affected by COVID, who is not claiming EI, or has not been (re)hired by their employer. Reminder – if you’re on EI you will already be in the system for CERB as applicable.

If you have been hired back and are being paid via the 75% wage subsidy, you can’t claim this.

The front page of the portal for applications is now live (canada.ca/coronavirus-cerb), but you can’t actually apply until Monday, April 6.

Things to note since our last update (CLICK HERE):

Please read our overview from the last post. This post updates what we know and don’t know. The government’s announcement was delayed 24 hours because they’re still working out the details. And there are more details to follow.

IMPORTANT: This information is what was announced at the press conference. We’ve seen nothing written. And it’s not law until it’s gone through Parliament.

We note that the 10% wage subsidy that was announced earlier has been passed into legislation (on March 25) – unlike these measures announced on April 1.  The 10% is confusingly named the “Temporary Wage Subsidy for Employers (TWSE).  Same per-business and per-employee limits apply to the 10% as were previously announced.  We haven’t seen the paperwork, but as far as we know, the 10% TWSE remains in place, and the businesses that down qualify for the 75% CEWS can claim it.

Again, an emphasis that this is “policy on the fly”… We have some sympathy, as they are trying to push through huge technology and process changes, in an incredibly short time.

Q1: Who gets the subsidy money? And what about the 10% we heard able earlier?

The process appears to be that the company will pay employees at least 75% of what they were making before, as normal – and then apply to CRA for reimbursement. CRA will reimburse the employer up to 75% of the wages previously paid. Reminder – only eligible companies can apply – see Q6(a) and (b) below.

We understand that if you qualify for and claim the 10% – you only get to claim an additional 65% here.  In other words, you get up to a total of 75%, but no double-dipping.

We believe that all the payroll processes (methods of payments, deductions, etc.) will apply as normal. The burden is not on the employee to apply. We also assume that means that T4 process won’t be affected, other than reflecting the actual salary received (regardless of if paid by the employer or covered by the government).

If somebody was on salary or stable hours, then it’s fairly simple – the government will reimburse the employer 75% of that.

Less clear as to how you calculate it for somebody with variable hours or overtime. The Q&A suggested looking to what was paid in the past – suggesting that you calculate it using (for example) an average of the last 3 months. Unless we get specific guidance on this, this may be a decision for the employer to make, potentially in discussion with the employee(s).

We assume that this reference to earlier months is also meant to limit risk of abuse (people suddenly adding their kids to payroll, increasing their own hourly rate, etc.).

The subsidy will be 75% of whatever the “baseline” or wage is, as per above. That means that the employee will receive a salary/wage of at least 75% of that, to a maximum of $847 per week per person. That’s 75% of an annual salary of $58,40.  Unlike the initial TWSE subsidy, this 75% CEWS does not have a cap on the total $ per employee or total $ that can be received by the employer.

The PM and Minister Morneau also reiterated that they expect employers to “do all they can” to top up that wage, ideally to keep it at 100% of the baseline amount. This means that the company has to cover cashflow for 100% of the wage (plus employer EI, CPP etc.) in the short-term, and ultimately pays 25% of it after subsidy.

It was also acknowledged that in some cases – for example, your restaurant is closed – that this will not be possible. It’s a strong encouragement to top salary up. This was mentioned several times with different wording, with lots of references to “all in this together”…

However….. There was no word if the government will revisit this later. Or, if so, how they would assess whether or not employers really made all efforts, to top up salary. We seem to be assuming good faith, for now.

Q4: How does the employer get the money back, and what’s the cash flow impact?

Minister Morneau indicated a CRA portal to apply, with funds to flow by mid-May. He stressed that they are building the system as fast as they can. As said above, we have some sympathy with this – the changes are HUGE and the timetable very short.

Companies need to be aware that this may strain their cashflows, if you’re running payroll in April, but not getting the money until mid-May.

The government acknowledged this and referenced the cashflow support that they have tried to put in place, to help companies bridge this gap. See our prior posts, but as a reminder these include:

Q5: How and when does the company phase employees back in?

The government didn’t discuss “how”, but encouraged “as soon as possible”

This is a decision for the employer: “I have no money coming in. When can I first afford to start paying payroll again, given I won’t get reimbursed until mid-May?”

In many cases, the employer won’t be in a position to “backdate” payroll to when the crisis started.

Minister Morneau indicated that employees should claim the CERB (or EI), if they suffered a gap in paid employment before wages start to flow again. Recall that CERB claims can be backdated to March 15. Again we hope that details will follow.

Q6(a): Is my business eligible to apply for the subsidy – Business structure

It’s been clearly stated that there is no size restriction and that charities and non-profits are also eligible.

We believe that from remarks that the CEWS is also available to unincorporated businesses – those who are structure as proprietorships or partnerships – rather than just corporations.  If correct, this is helpful and a good clarification.  we look forward to seeing the paperwork.

Minister Morneau did not address whether unincorporated employers – those who are structured as proprietorships or partnerships – are eligible for the subsidy. He used the word “company” (not “businesses”) in his prepared remarks, although it was less precise in Q&A. So we still don’t know if unincorporated businesses can apply. We hope this will be clarified.

He also did not address whether or not the business needs to be Canadian-owned or controlled to be eligible. For example, is a Canadian company eligible, if it is controlled by US shareholders? We don’t know. From some wording that was used earlier, we assume that this means Canadian-controlled companies only, but we don’t know this for sure.

Eligibility is based on a 30% reduction in your gross revenues in the corresponding month in 2019 (and you need to reapply each month).

There are several unknowns. Here are the obvious ones – we hope we will see clarity on these:

Q7: I’m an employer – what do I tell my employees?

We always recommend to be as truthful as you can – including on what you don’t know. But we also suggest you think through your answer to some of the questions we’ve posed above, so you don’t mislead or create false expectations.

One extra thing from the Ontario government

The Feds have been making most of the running – but the provincial government hasn’t been idle either. For those of you in Ontario, we refer you to https://budget.ontario.ca/2020/marchupdate/annex.html#section-3.

In particular, we draw your attention to the Regional Opportunities Investment Tax Credit…. If you’ve been thinking of buying commercial property – and those plans will survive this crisis – your Ontario government wants to help you out with up to $50,000. Fortune favours the bold!

Clearly there are things we don’t know. We hope the above will be helpful. Please think through your situation, then call us if we can help.